Why is the Sky Blue? Or Better Yet, Why is the Ocean Blue? 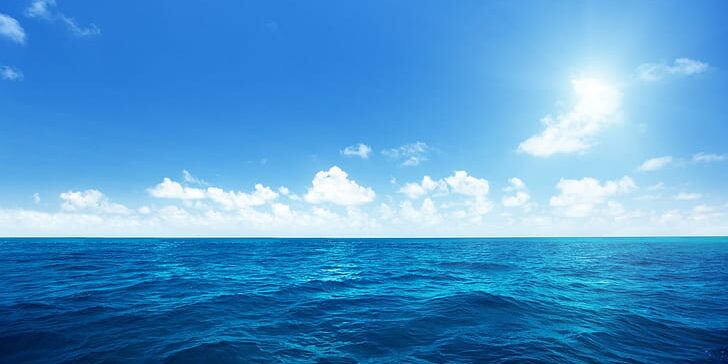 The sky is blue due to a phenomenon called Raleigh scattering. This scattering refers to the scattering of electromagnetic radiation (of which light is a form) by particles of a much smaller wavelength. Sunlight is scattered by the particles of the atmosphere, and what comes through down to earth is called diffuse sky radiation, and though only about 1/3rd of light is scattered, the smallest wavelengths of light tend to scatter easier. These shorter wavelengths correspond to blue hues, hence why when we look at the sky, we see it as blue. At sunset and sunrise, the angle at which sunlight enters the atmosphere is significantly changed, and most of the blue and green (shorter) wavelengths of light are scattered even before reaching the lower atmosphere, so we see more of the orange and red colours in the sky.

The ocean is not blue because it reflects the sky, though I believed that up until a few years ago. Water actually appears blue due to its absorption of red light. When light hits water, the water’s molecules absorb some of the photons from the light. Everything absorbs at a different wavelength (Your green t-shirt absorbs red), and as a result reflects the remaining colours back at a viewer (that’s why your t-shirt looks green). In shallow bodies of water (like a drinking glass) light penetrates it completely, as there is not enough water to absorb enough photons, so we see the water as colourless. In deeper waters however, not all the wavelengths of light can fully penetrate the liquid, as there are too many water molecules in the way of the photons. The water molecules absorb all the red wavelengths from the light, making it reflect blue. This is also why shallower waters appear ‘less’ or lighter blue than deeper ones- less absorption means less reflection.